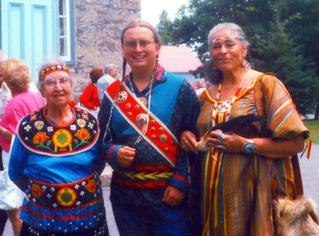 Paul-René with two Abenaki elders Cécile Wawanolett from Odenak, PQ and New York. Also, Molly Keating from VT. The picture was taken at Odanak, PQ in 1997. Paul-René is not from Odanak, but loves the language, and his work with this language is a connection to his ancestors who would have spoken this and related languages.

Paul-René spent weeks with Cécile Wawanolett in both Troy, NY where she had moved with her family in the 1920’s, and at Odanak, PQ where she hoped to help develop a Western Abenaki language program. It was Cécile, when already in her 90s, who convinced him to go back for a doctorate as she was getting older: “You better hurry up – you keep saying we need to work on the language, well I’m getting to a point where we better begin!”. In 2000 Paul-René entered a PhD program at Indian University hoping to focus on the Western Abenaki language and work with Cécile. At Indiana university he studied for a year under Dr. Philip S. LeSourd http://www.indiana.edu/~dsls/faculty/lesourd.html who works with Passamaquoddy-Maliseet a closely related language (see http://pmportal.org/ ) . By 2003, however, Cécile was unable to continue intensive work due to age and Paul-René changed his focus after finding work at University College of the Cariboo (now Thompson Rivers University) in British Columbia.

Paul-René managed to find other Eastern woodlands peoples wherever he lived. Below is a picture from 2000 in Oregon where Françoise M'Sadoques had been living for many years. Originally from Odanak PQ she was a fine basket weaver.

Paul-René brought her ash splints and sweet grass. Françoise and he wove a basket together. Paul-René had pounded splints as a younger man, but never made a basket this was his first… not too good but Françoise gave it a “pass” and both signed the bottom. PIcture shows Françoise M'Sadoques & Paul-René - Working on his first “fancy basket”. 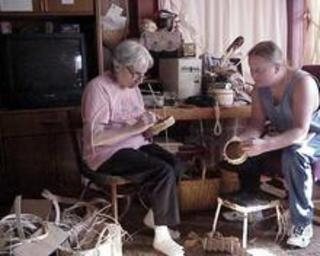